That was a long time ago… In 1991 as I was in my third year at university (Bachelor’s degree) I made a collage mounting. On a big photograph, which was the base, representing a home scenery: on the left, a chair against the wall, in the center a pedestal table with a bird in a frame on the top of it, and on the right a portrait of a woman. I added an egg on the chair and a hippopotamus with its mouth wide open in the direction of the egg.

A friend of mine –studying egyptian art- immediately recognized the setting of a mythology scenery : the goddess Thoueris driving bad spirit out of the house to favor births.

I started on different tracks, and finally decided to synthesize the shape of the hippo, to make it graphically autonomous while preserving its symbolic nature.

I put the pattern of the hippo in various situations and mostly making it speak on the focus of domesticity.

If in the time of Ancient Egypt, the hippo female used to be beneficent, benevolent and positive, the male hippo that devasted the harvest, was destroying and negative. I am interested on the ambiguity…Some can think the hippo is talking to the egg, others that the hippo will devour the egg.

…from its shape, some visitors notice the soft motherly roundness, other would focus on its angular and threatening open mouth. The « creature » takes its meaning from the feeling of the visitor that’s what I enjoy…

I « walked » my hippo (with difficulty) almost full size made of polyurethane and took it in all sorts of situations. 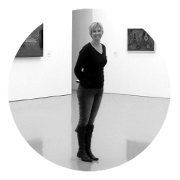